Glasnevin Cemetery Museum is one of Dublin's most popular tourist attractions and with its 124 acres, it is also Ireland's largest cemetery. Since 1832, more than one and a half million people have been buried here. Nowadays this attraction is running daily a series of guided walking tours to uncover the life of both famous and lesser known historical figures.

Led by a very knowledgeable and passionate group of guides, the tours at this attraction will give your group a valuable insight into this unique Victorian burial place and the final resting place of the men and women who have helped shape Ireland’s past and present. The cemetery is host to a wide range of interesting people; from politician and activist Daniel O’Connell, leader of the Dublin lock out James Larkin, Michael Collins, a leading figure in the Irish War of Independence, to the father of the author James Joyce.

A variety of walking tours are available for student groups and CGH highly recommends the General History or the Dead Interesting Guided Tours - details below :

This tour will offer your group a general overview of the history of Glasnevin Cemetery and will take them to the graves of the historical characters who played a decisive role in shaping the course of Irish history to the present days. A few examples are Daniel O’Connell, Michael Collins, Roger Casement, Charles Stewart Parnell and Countess Markievicz. Your guide will also mix historical information with anecdotes about the famous people buried in this cemetery, making the tour even more memorable.

This tour covers the history of some lesser known inhabitants who had had peculiar lives, such as Maria Higgins, a woman who died once but was buried twice at Glasnevin Cemetery, and Willoughby Hamilton, Ireland’s last Wimbledon Winner. Your group will also learn about the sculpture, architecture and natural life of the graveyard.

** A self-guided visit to the Museum is also included with the walking tours. This visit is interactive, informative and at the same time houses several interesting exhibitions such as the “City of the Dead”, whose aim is telling the history of the major historical figures buried in the cemetery. To make this visit even more exiting, it also hosts a genealogist that can help your group to find out if they have any Irish ancestors. At the end of the self guided tour, your group can chill out at the café and browse the souvenir shop.

Is your group interested in learning more about Irish History and particularly 1916 ? We would highly recommend you including in your Dublin Group Itinerary the 1916 Rebellion Walking Tour led by the famous Lorcan Collins. 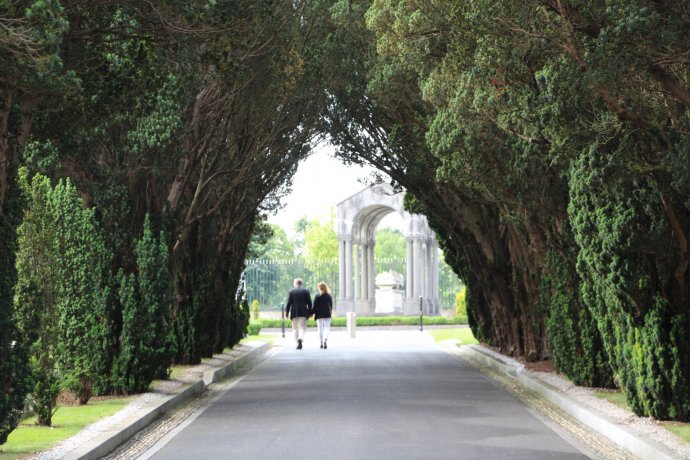 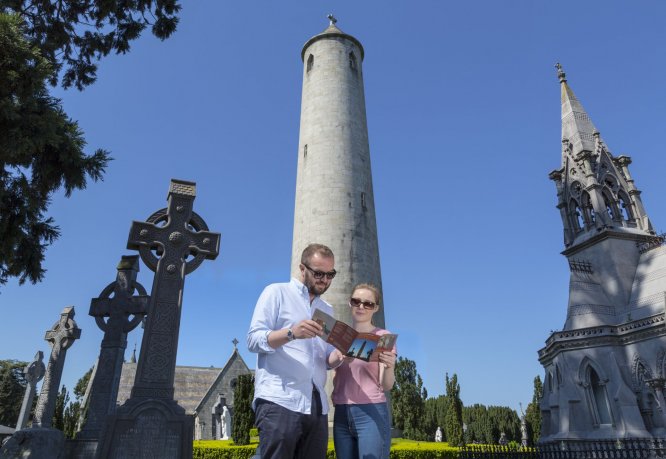 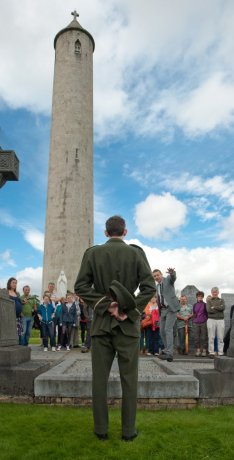 Private tours for groups can be arranged during the opening hours.

Please be aware that Glasnevin Cemetery Museum is located at about 15 minutes-drive from the city centre. We recommend you either take the public bus routes 40/140 from O'Connell Street to get there, or let us arrange a private coach transfer for your group.

A visit to the O' Connell Tower is also possible for a supplement, however its access is limited to a maximum of 6 people at one time. The Museum has a strict supervisory rule regarding the access to the tower. Students under 16 years old must be accompanied by an adult, with a ratio of 1 leader / teacher for a maximum of 3 students. Children under 8 years old are not allowed to climb the tower.

A guided tour lasts approximately 90 minutes and allows 30 minutes for the museum which is self-guided.

Benefit from our 26 years' experience in handling over 800 groups to Ireland per year (30,000 students).

Pat Liddy Themed Guided Walking Tours of Dublin
We are always telling our groups that the city is literally on their doorstep when staying…
Tags: Activities, Top Picks, Literary
Locations: Dublin
More Info